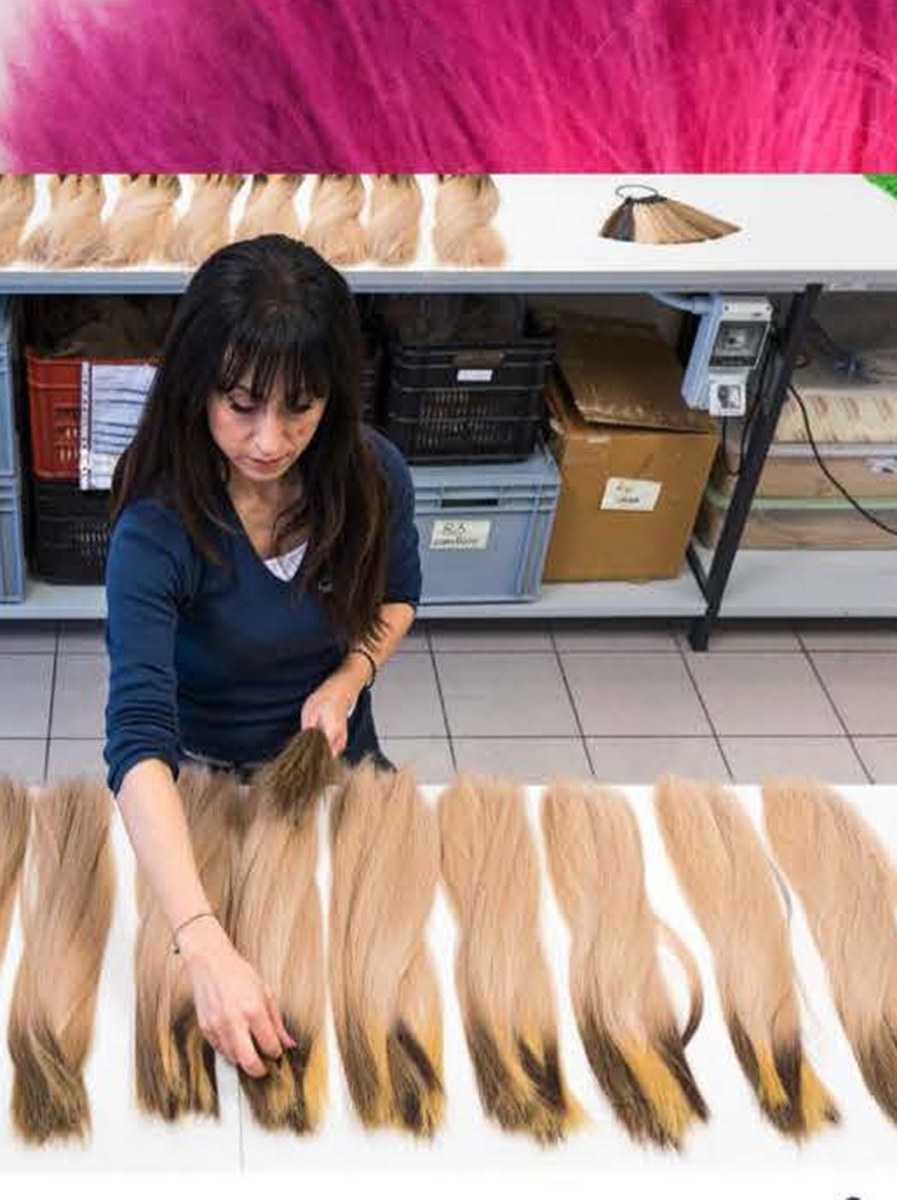 A deep dive into crafting the Ferrari of hair extensions.

WEEKS BEFORE NEWS REPORTS AND TRAVE ADVISORIES, PAIGE STABLES FLEW TO ROME IN SEARCH OF THE BEST HAIR EXTENSIONS IN THE WORLD. SHE FOUND SO MUCH MORE.

Let’s start with the dinner. There was the handmade fettucine swirled to perfection and topped with a dainty dollop of caviar. There were no less than four separate breads that had scarcely left the oven before they were in my mouth. Food, as the world knows, is a very worthy reason to go to Rome. But it’s not why I was there. It was late January, and I was there to meet with a man named Fabio Antonino, the CEO of the hair extensions

company Great Lengths. Just as I left, Rome confirmed its first case of COVID-19. Shortly thereafter, the entire country was on a lockdown of unprecedented scale. But in late January, that earlier, more innocent pre-global-pandemic era, Antonino and I sipped espresso and talked about hair. Antonino’s extensions are some of the best in the world, and at that first meeting, I had little idea how little I knew.

The hair extensions found inmore than 40,000 salons in over50 countries are made in the Italian town of Nepi, in exurban Rome. They are made of human hair from India, sourced from a ritual known as tonsuring, a religious practice where hair is voluntarily sacrificed and donated. The extensions gleam in the sunlight. They are richly colored, not by box dye but by thousands of shades coming together to form a kind of genetic tapestry. These are the Ferraris of extensions—so natural, so delicate, they could have grown out of your head. (But they didn’t, and that’s why Great Lengths exists.)

Inside Great Lengths headquarters, over 200 pounds of hair is processed daily. During my visit, I saw a room filled with women silently focused on handfuls of hair. Some were carefully combing strands; some were snipping the ends with the skill of a surgeon. And not a single one registered my presence. There was a long table, completely covered in blonde hair, and farther away, a set of tables covered in brown hair, resembling an assembly line where, perhaps, Instagram influencers are made from scratch.

And now a few basic facts about Great Lengths extensions for the unversed: Every strand undergoes a lengthy process (it can take up to six months) to meet the “100 percent Remy” standard (meaning the strands are aligned in the natural direction of the cuticles) and the “double drawn” standard (hair is the same fullness at the top as it is at the bottom). A couple of pieces of machinery are involved, but almost every step has been done by hand since Great Lengths was founded in 1993: “Nothing can substitute the human [hand] in this kind of craft,” said Antonino.

Some of the most careful handiwork comes into play during the coloring process. “We had to build a system on our own because the kind of method we use is [traditionally] only used for cashmere,” he explained. Before the hair is dyed, rather than the original dark color being bleached out, it undergoes a “depigmentation” process, where natural pigments are gently stripped away over the course of up to a few weeks by washing them in an oxidant solution. By skipping bleach, that silky virgin-hair texture is preserved. In the color room, exposed pipes line the walls and connect to massive metal vats. We watched bundles of hair get dipped into the huge tanks of violet liquid, hair that would eventually become snowy blonde. In the bright, sterile room known as the blending department, I met Daniela, a 20-year veteran of Great Lengths whose chocolate-colored hair cascaded past her shoulders. Daniela has a special power: She can envision any single hair color as a prism and replicate the shades you would find on an actual human head. She’s the one who makes these extensions look like real hair. Daniela’s team took a base color and mixed it with six or seven additional hues. The mixture of shades was then repeatedly pulled through a kind of Plinko board thingy to blend them together. Minutes went by, and then she held up a bundle next to the desired color swatch. The colors in the two bundles melded seamlessly. The extensions were perfection. She nodded her head almost imperceptibly and moved on.

Of course, none of us could have known what was going to happen to Great Lengths and Italy, and so many of us, in the weeks and months to come. At press time, the company was weathering the storm. “This is a difficult time for all humanity,” Antonino told me over email. “Great Lengths is a proudly Italian global business. Throughout this time we will stay close to all of our clients, colleagues, suppliers, and partners.” And when Italy opens for business again, I know the artists at Great Lengths will be back to their posts. Their meticulous, head-turning work is not yet done. 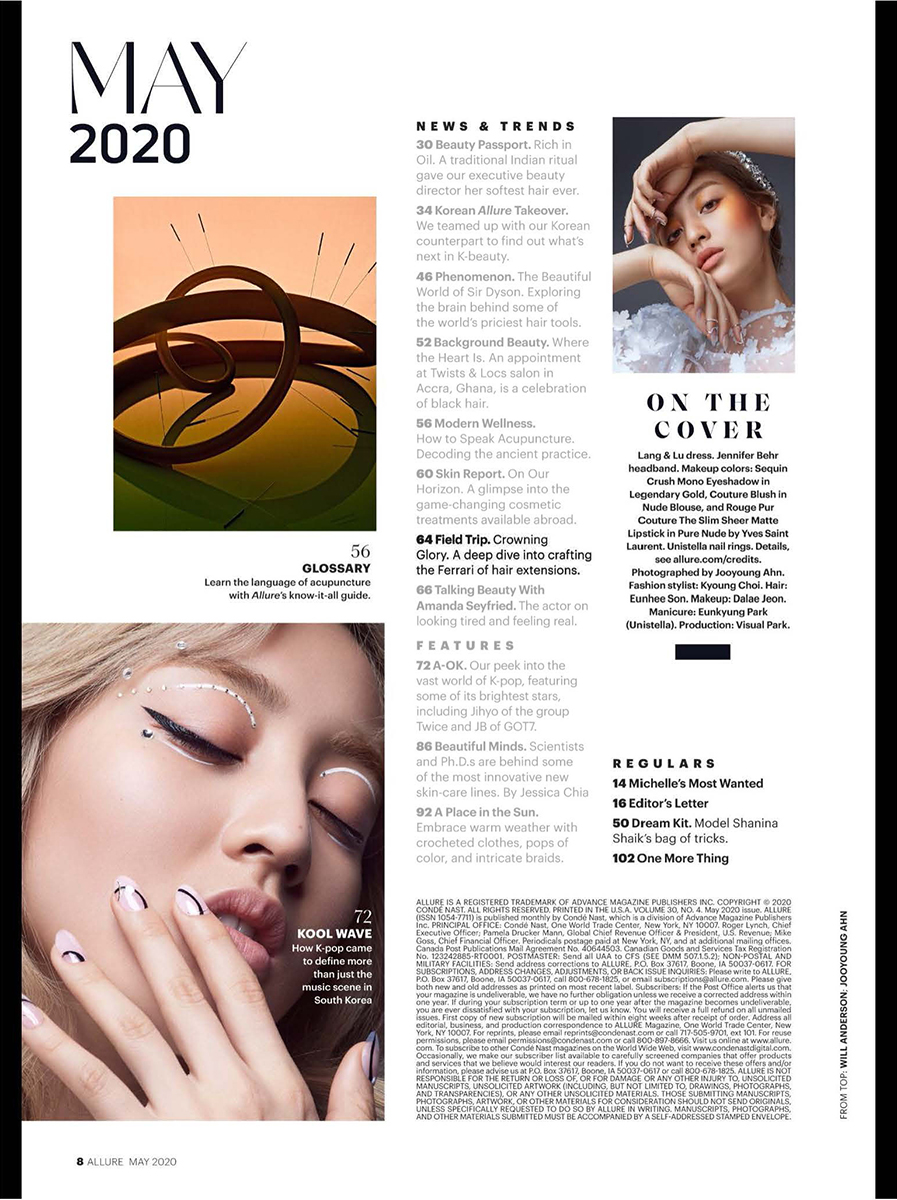 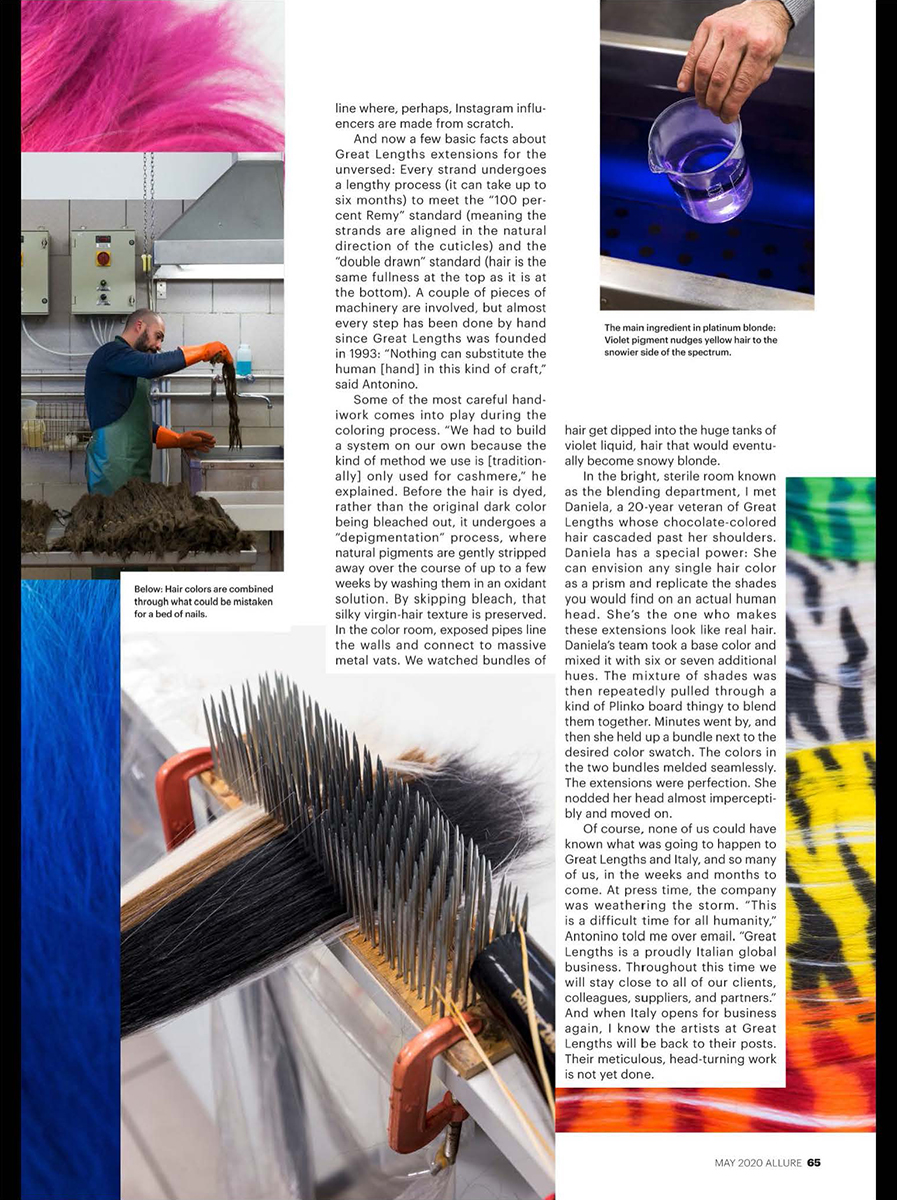